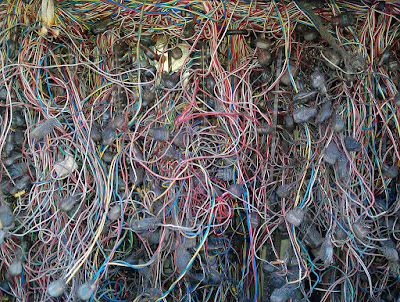 I know not how my more recent crops of essays became so exceedingly unwieldy in their style, nor how so monstrously technical or too-difficultly overworked. But it already seems quite assured to me that they are so. Thus, however, instead of pruning back how over-burdened with derailing flourishes these essays of mine have become, I, perhaps altogether unintentionally at first, have rather gone on in my writing to exacerbate their elephantine/labyrinthine stylistic faults. Perhaps, as such, nearly no one will ever read any of these (thus rather “private”) experimental pieces through with anything like the rigor that is requisite of their least sufficient comprehension (however that might be judged?), but, even so, know that they are in fact (very much too) tightly argued and, indeed, even almost---if in the least comprehended at all---endearingly persuasive documents.

Religion may be defined “negatively”, if you will, as the opposite of anarchy. Thus, in an affirmative form, religion is the “binding back” of anarchically unique unicities into the sameness of a unity. Religion, as such, or once over again, is the pleromatic unification of the otherwise infinite plenum of unique unicities. If anarchy, in one of its paradoxically most radical (“rooted”) senses as “an-arche” (i.e., “the absence of any beginning [or root]”), thus already establishes itself an essential modality of the “pre-original” void---out of whom all of “what is” (Being, existence, et. al) ever comes to be; then this said radical (but now “rootless”) sense of anarchy also ranks, if you will, chronologically (but nowise historically) as absolutely prior to any of its otherwise historical unification(s) into religion(s). Anarchy is then, to put it again otherwise, the pre-original void from out of which the miraculous/impossible event of religion (religiosity) “decides” its own genesis and thereafter also donates/substantiates it(self) as an “uneven but permanent” (Trotsky, et. al) unfication/involutionization/totalization into more or less self-sameness, or auto-foreclosed autarky/autarkies.

“Religious anarchy”/”anarchic religion” (and the like) are oxymoronic concepts, and are initially introduced herein strictly as illustrative (in the negative) of the antinomy of their terms. Subsequently, however, these same pairings of otherwise antinomian terms (“religion” and “anarchy”)---instead of acting as counter-factual feints of a pseudo-covert pedagogical method---may help to define the conversely apposite/opposite extremes (or limits) of a conceptual spectrum---along whose inner scalar any actual historical-empirical events may register as intermediary intensities (or “concrete abstractions”; see: Marx)---that is, as more or less religious or anarchic (in mixture). That is, if “religious anarchy” is ever anywhere affirmed as otherwise than an oxymoron, it thus conceptualizes/nominates the real balance of forces then extant between its terms (again: “religion” and “anarchy”).

Whatever the scales (conceptual, quantitative, ...?) employed to concretize/measure the abstract(ed) dimensions of empirical reality whose “axes” (as it were?) are religion and anarchy, I believe that---even if each and every instantaneously new registration of our senses entails the reformation of our entire logical organon, our entire ethical teaching, our entire scientific method, our entire socio-corporeal affectivity (this lattermost as the most total scale presently imaginable upon which finition, or individuation, integrates [without integration] into infinity)---nevertheless, despite even this restlessly rigorous empirical renovation/redefinition infinitely re-affecting our subjective totalities, despite even how any regularity is, if not a miracle within the abiding chaos of the real, then essentially a consoling ruse of our neural evolution---such that epistemological normalcy (in we humans, if not also simply all vertebrae) is defined as the hallucination of norms into an “anormal” or “normless” externality (that does not itself even “consist”, or “ex-ists” exclusive of any norm, as the incessant [perceptual] estrangement of a pure irregularity, absolute inconsistency, or infinite chaos)---despite all this (these detours which have become the central arterial highway of this, as it were) I believe that the real behind the scalar intensity of either religion or anarchy, taken in absolute spatiotemporal terms, will never register at either of these extremes in a pure polarity, unmixed of its other.

The anarchy evident in this text (or its technical plethora of derailments; especially on the grammetrical levels of inter-sentence clause-formations---parenthetical and elsewise---and multi-sentence paragraph-constructions), insofar as this, or any, text is hermeneutically decided to be “articulated”, or a closed totality (alone unto itself), is, if it is at all, a yet fuzzy set of disparate and/or irregularly indicated anarchies, or minor passages/scenes of more or less derailment from the prior norms/regularities of generic textuality (once) (before) extant in the identities of its language/ethnic-groupings. The religiosity evident in this text (also evident only if a prior hermeneutic decision is made to interpret it as a closed article, or finite system of physical signifiers---possessed of a definite beginning, middle, and end---and so also as a totalized structuration of regularly affective ideologemes/meanings, et. al) is, if only as such, this text (unto) itself (as itself). Verily, there is no space for anarchy in this text whatsoever once its hermeneutic is “properly” closed into a finite article. The derailing anarchies in even the least sequences of empirical instants obtained by its actual readings (if only at this most inaugural date in its history) may perhaps still be immediately extant, as such, if only until any one infinitesmally abrupt (arbitrary) interpretive decision is made “to come to and end” of “all” this, to mark out its “finish-line”, finalize its reading into an unified image, or absolutely purify the lineaments of its presence(s) by marking out the unique essence(s) of its absence(s). A text is religious (of religiosity) only if it is decided, or made, to be so---but once so religiously (hermeneutically) transformed, it is religious alone, is a religion unto itself---if only as the result of an arbitrary hermeneutic arbitration (or injustice?).
Posted by Max Clark at 7:52 PM