The Masterpiece of My Life

I seem to be becoming a saint. 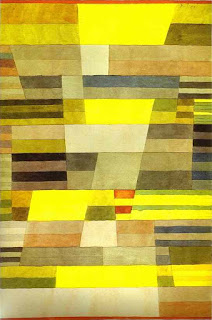 Derailment: what is the analytical criterion for distinguishing between narrative continuity and disjointure? Or, (pseudo-derailment:) isn't "juxtaposition" essentially an incoherency in and of itself, and esp. on its conceptual register? And isn't the explicit failure of an author, or a self, to cohere within a generic ensemble, a genre, or even a genome, actually an ethical candor, or even the self's very mode of existing? And (to continue on more inconsequently than is perhaps normal:) all atoms of matter must swerve away from their natural course in order to even be (Lucretius). Inconsistency, or multiplicity, is of the essence of being. Beyond being, in deontology, or ethics, is only the unsaid and unsayable, a non-place whose contours are yet more difficult to betray within prismatically orderly and well-sequestered language than outside, among the wilds of such pulverized archipelagoes of the word as I exude. Break: I am gleaning the sweetness out from along the vents. All of this to say something more unrelated than not: in breaking the forms of language more severely than others I achieve both an ethical and poetic preeminence among them, as shattering their vessels of totality opens the way to an entirely creative infinity, and this is also a kind of non-spatial transcendence into the beyond of my being that welcomes the face of the neighbor in an absolutely respectful distance and peace, without imperializing their difference into a sameness of genre or form or style or, maybe even, name. Hinge: the disarray and multitudinousness of being is not negated in my ethical turn, it is positively irritated, aggravated in its intensity until the overabundancy of its atomistic essence leads to an exhaustion of this finite modality at the extremes or cruxes, the edges, the periods: hence an absolutization of the only potential or partially incoherent, disjunctive character of being, as in the cracking open of a wrinkled nutshell, and the possibility of a truly non-correlative and loving relationship being founded.
Posted by Max Clark at 6:39 AM